.22LR ammunition manufacturer, ELEY, has enjoyed even more success this shooting season, after winning eight out of 12 small bore medals and an additional eight quota places at the third 2019 ISSF World Cup in Munich.

In total, 919 athletes from 98 nations travelled to the German city in the hopes of securing a ticket to Tokyo for the next Olympic Games.

It was the men’s 50m 3P that kicked off ELEY’s winning streak with seven out of eight finalists putting their trust in ELEY tenex. And it paid off. Both Korean shooter Kim Jonhyung and Serbia’s Milutin Stevanovic seized the quota places for their home country.

The pressure was on in the women’s 25m pistol, with another two quota places for the taking. Fighting to secure her spot on the podium and an Olympic quota, team ELEY’s Antoaneta Boneva was up against German shooter Vennekamp to remain in the top three.

Using ELEY tenex pistol, Boneva struck the targets she needed to stay in the running and secure the quota place for Bulgaria. This meant it was an all ELEY shoot off for the final three with Rahi Sarnobat taking gold, Olena Kostevych silver and Antoaneta Boneva bronze.

Day three of the World Cup focused on the men’s 10m air rifle with ELEY’s Oleh Tsarkov shooting a 10.9 to claim a quota place for Ukraine. Croatian shooter, Petar Gorsa, showcased his shooting talents in a steady performance to claim the silver using ELEY tenex air. 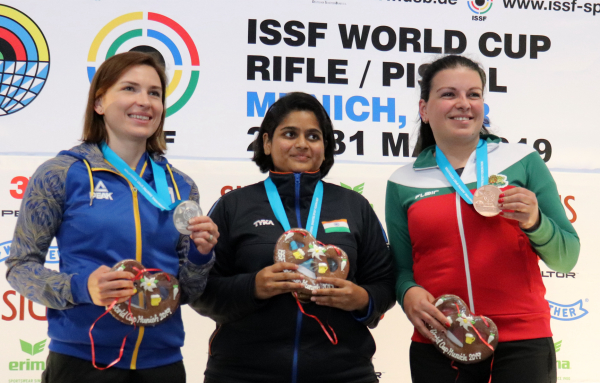 The penultimate day of competitions saw another all ELEY final three in the women’s 50m 3P. Russia’s Yulia Zykova shot a 10.6 to take her first-ever ISSF World Cup gold and quota place, despite being in second position for most of the final. Great Britain’s Seonaid McIntosh and Norway’s Katrine Lund took silver and bronze respectively, with the Norwegian shooter claiming the last quota.

One of the last individual events was a closely contested women’s 10m air pistol final. Here, ELEY’s Anna Korakaki managed to claw back points after dropping down the leaderboard into third, shooting a 10.5 to come out victorious with 241.1 points – just 0.8 ahead of China’s Wei Qian.

“Munich always attracts the world’s elite shooting athletes and is a fantastic World Cup. The atmosphere and shooting has been spectacular, despite some of the unfortunate weather, and it’s an honour to attend the event each year. Our shooters really are on top form and we always look forward to watching them compete and train ahead of the next Olympic” commented Michael Atkinson, brand manager for ELEY.