These new products will be announced and on display in Booth No. 14551 at the 2020 SHOT Show, January 21-24 at the Sands Expo Center in Las Vegas, Nevada. The new Practice & Defend Packs are shipping in January 2020 and Federal Premium Solid Core is scheduled to start shipping in the Spring of 2020. 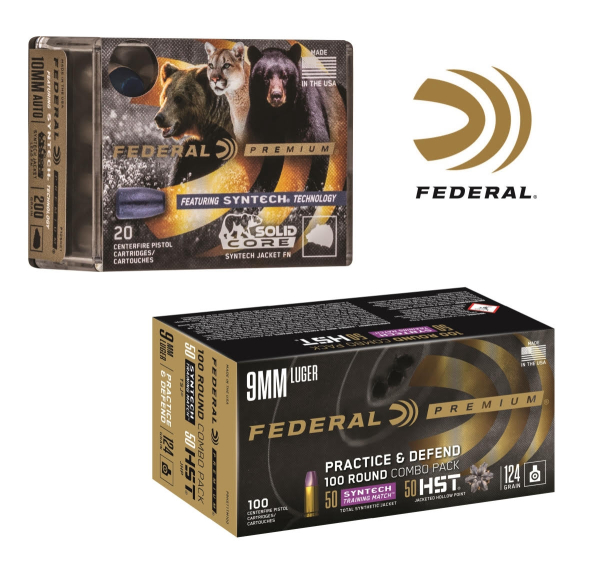 “New for 2020, we are adding a 148-grain, 38 Special load to the original Syntech Range product line. And we are also offering new combination packs that paired Syntech Training Match with HST Personal Defense together as one product,” explained Federal Product Director Mike Holm. “Last but not least, we are introducing Solid Core which is a Federal Premium-branded product featuring hard cast bullets that utilize Syntech technology. These high-end loads are intended for hunting or as self-defense against possible dangerous animals when out hiking or camping in the wild.”

New Practice & Defend Packs pair self-defense loads proven by law enforcement with ballistically identical training ammunition for a combination like no other. These convenient combo packs include 50 HST Personal Defense loads and 50 Syntech Training Match rounds. All produce identical velocities, trajectories and point of impact for the most realistic training and utmost protection. It is available in four product options including two options in 9mm Luger, plus an option in 40 S&W and 45 Auto.

New Federal Premium Solid Core can take down anything from hogs to bears. The all-new line of handgun loads hits game harder with a tough, flat-nose lead bullet that holds together while blowing through bone, providing high weight retention and deep penetration. Syntech polymer jacket technology reduces the friction and leading that plague hard cast bullets. This deep-penetrating, hard bullet holds together while blowing through bone. It is intended for hunting, and as protection against dangerous animals. Solid Core is available in six offerings ranging from 9mm Luger to 44 Rem. Magnum.

“It’s all about having a better shooting experience. With range time so precious to all of us, it only makes sense to choose ammunition that makes that time more fun and more productive, with less hassle and cleanup afterward,” said Holm. “With Syntech, you have it—more of what all shooters want, and less of what you don’t.”

For more information on all products from Federal, visit www.federalpremium.com.