The Arsenal SAM7K-04: New features on a proven pistol 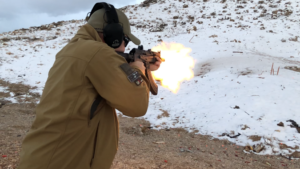 There were many innovative and exciting new products at SHOT Show this year that have already put a dent in my annual firearms budget.  However, not all innovation needs to be groundbreaking.  Rather, sometimes innovation simply takes something that is already great and adds something simple that makes it better.  That is what I found in the new Arsenal SAM7K-04 Pistol.  Many of you have probably already shot or own an Arsenal SAM7K pistol and, like me, know the quality of the craftsmanship and reliability that is inherent in all Arsenal products. But, Arsenal has now made this great pistol better by integrating a picatinny rail on the back of the receiver, so now you can attach your favorite accessories.  Whether that means using the included sling swivel or finding a compatible brace, the potential for enhancing this pistol just became exponentially greater.

The SAM7K pistol line are Kalashnikov-patterned pistols chambered in 7.62x39mm build on the Krink gas system.  Each SAM7K pistol receiver is milled from a hot-die hammer forged receiver blank by the Arsenal in Bulgaria. While other milled-receivers are machined from bar stock, Arsenals hot-die hammer forging produces stronger and finer-grained steel which combined with its 5-ton hammer forging process eliminates internal voids and cooling deformations.  Other integrated features in the SAM7K pistols are a peep rear sight, ambidextrous safety lever, and AK scope rail.  Simply put, Arsenal is the gold standard for AK’s and the SAM7K is setting the standard for AK-pistols.

I was able to pick up a SAM7K-04 from the great guys over at K-Var.  In the box I got my pistol which included a QD sling swivel as well as one 5-round magazine, oil bottle, cleaning rod, cleaning kit.  For me, the first thing I did was remove the sling swivel to make room for a Sig folding brace I had around the house.  After taking all the measurement to make sure I was still working with a pistol and not an inadvertent SBR (make sure you know the regulations or work closely with your local gunsmith or ATF agent to make sure you do not inadvertently convert any pistol into an SBR), I was ready to head out for some test firing.

To say the least, I was not disappointed.  The gun performed flawlessly eating every round like the insatiable little beast it is.  I ran Circle 10 mags, steel mags, X-Tech Mags and even ran the KCI 75rd Drum without any issue.

The Krink gas system performed again and again.  The ambidextrous safety was nice as I changed out mags and reset targets.  The rear peep sight was a nice upgrade but, given the scope rail system that comes standard, a red dot may be my next addition to this fun little project gun.

After a bit of shooting I wanted to make sure everything on the inside still looked good and found cleaning and accessing the internals was easy to do with the hinged dust cover and the easy removal of the upper handguard and gas tube once the dust cover was open.  I was also able to get a good look and feel for the bolt, bolt carrier and double-hook trigger that make this firearm run so smoothly.

In the end, I feel confident that any shooter looking for an AK pistol or wanting an AK that they could convert into and SBR, would be happy with the Arsenal SAM7K-04 pistol.  I am happy with mine and already searching to figure out what I am going to do with it next.