(COLORADO SPRINGS, Colorado – June 12, 2019) – A marathon start to this shotgun summer concluded Wednesday at International Shooting Park in Colorado Springs for 186 talented junior participants that fired at as many as 475 competition targets over a two-week stretch.

Competing at the two-day National Junior Olympic Shooting Championships (NJOSC) after a five-day National Championship left competitors physically and mentally fatigued. Athletes like Carey Garrison, Heather Broski, Jade Krolikowski and Grayson Davey pushed through to earn medals at both events while Jack Brosseau made sure people were talking about him at the conclusion of the festivities. 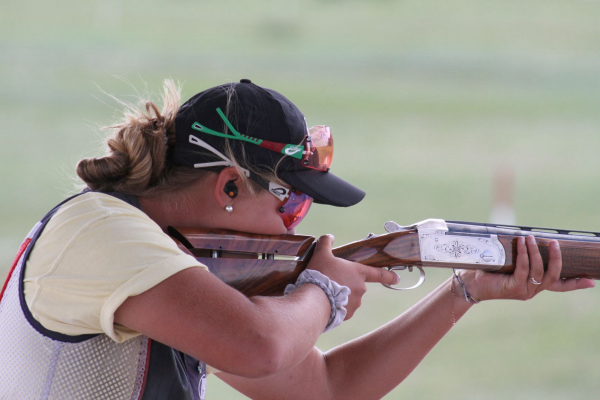 Tennessee natives Garrison and Broski might hail from the Volunteer State but neither of them was voluntarily stepping back from anything in the quest for top junior supremacy in Women’s Trap. Saturday it was Broski (Spring Hill) winning the Junior National title by two targets. Wednesday it was Garrison’s (Crossville) turn, claiming a second-straight NJOSC title by three targets over Broski. Claiming third each time behind the Tennessee duo was Krolikowski (Dannebrog, Nebraska), who had a true breakout performance in Colorado to earn a spot on USA Shooting’s Junior Olympic Squad. Garrison topped all qualifiers with a 118/125, four targets better than Broski.

Garrison is on quite a run after also earning the title of Mixed Team champion with Roe Reynolds (Quitman, Arkansas) Saturday. Garrison has been so successful in the event the past couple years, you sometimes forget that she’s still just 14. She was Junior National Champion at age 12 and was the youngest USA Shooting athlete ever to make a World Championship team when she competed in Changwon, South Korea in 2018. She began the year finishing second among juniors at the Spring Selection Match.

Brosseau saved his best for last and a perfect final 10 targets was enough to earn him his first international trap title. The win highlights a cooperative program between the Scholastic Clay Target Program (SCTP) and USA Shooting that is helping infuse international bunker with top shotgun talent. Brosseau is a product of the SCTP system and showed Wednesday that he has the moxie to compete at the highest levels of shotgun. Taylor and Broski were also part of the SCTP/USA Shooting National Team.

A score of 48 in the Finals is a World Record and on Wednesday, in variable light and wind conditions and little Finals experience, there Brosseau was breaking 46, which is nothing but world-class. National Champion Alex Rennert and the Junior National Champion Reynolds both shot 47 earlier this week to win their Finals at Nationals. Two of Brosseau’s misses came on targets 38 and 39, and then he’d never miss again.

Trying to match that was Grayson Davey (Anchorage, Alaska), but he’d finish three short with a strong 43. Davey was the only men’s competitor to earn two podium spots, cashing in bronze for silver on Wednesday. One of the two leading Qualifiers with a 118, 15-year-old Emilio Carvalho (Tranquility, California) would place third to earn himself a spot on the Junior Olympic Squad.

Up next at International Shooting Park, is the Nationals debut of Paralympic Trap competition featuring six participants. These athletes will shoot 75 targets Friday and another 50 Saturday followed by an event Final. USA Shooting’s National Championships for Men’s and Women’s Skeet gets underway Sunday.