HOUSTON, TEXAS – Primary Arms and Strike Industries have partnered for the exclusive launch of the Strike Industries Sentinel and Sentinel Elite Rifle Series. These AR15 rifles are chambered in .223 Wylde and boast a number of enhancements that make them standout rifles at their price point. California-compliant versions are also available for purchase in restricted states. 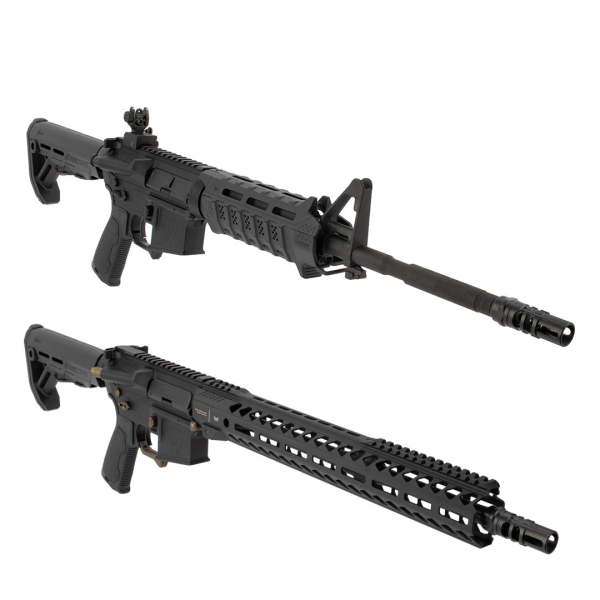 The Strike Industries Sentinel Rifle Series is built from the ground up with all the most popular Strike Industries components, creating a nimble carbine with an intuitive manual of arms. The .223 Wylde 16” barrel features a carbine-length gas system and Manganese Phosphate finish for exceptional reliability and durability in the field. The Strike M-LOK handguard offers a attachment points for forward accessories, while the JComp Gen 2 Compensator helps level the muzzle for accuracy through rapid fire. At 6lbs and 10oz, this rifle is quick to handle and robust enough for heavy use. Basic Sentinel Rifles come priced at $799.99, making them an exceptional choice for most budgets.

For those seeking premium performance, the Strike Industries Sentinel Elite elevates the AR15 with several key enhancements. The Sentinel Elite has a full 15” free-floated M-LOK handguard, which protects the 16” 1:8-twist .223 Wylde cryo-treated QPQ Strikefighter barrel and mid-length gas system. The rifle’s ambidextrous controls are also upgraded over the standard model, including an improved Strike Extended Latch Charging Handle. Priced at $1149.99, the Sentinel Elite series is an excellent value for its quality.

Since 2007 Primary Arms has delivered fast shipping and famous customer service on firearm parts and accessories, optics, and more. Since moving into a new 50,000+ sq. ft. facility in August 2017, Primary Arms has rapidly expanded their inventory to include tactical shotguns, handguns, tools, shooting gear, ammunition and even more optics choices.