Once known to only a few Wildcat shooters as the .300 Whisper, the .300 Blackout (BLK) measured as 7.62x35mm has become a fantastic cartridge gaining more and more popularity as time goes on. Although the quick rise in popularity has somewhat leveled out, it has still made gains in both Law Enforcement and Military circles and now making even more gains in the civilian world. It’s history doesn’t begin with J.D. Jones as many believe, though it would be accurate to state his company developed the .300 Whisper commercially. It actually begins way back in 1950 by Mike Walker of Remington. Mr. Walker developed the .222 Remington originally. One could also argue that the WWI cartridge 8x35mm Ribeyrolle has a strikingly similar ballistic characteristic and is the foundation of the round, although nothing to do with physical development. 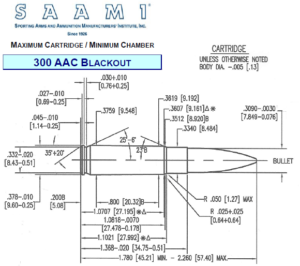 The .222 Remington was morphed into the well known .223 Remington in 1962. Skipping over the history of a cartridge that has been written about countless times, the .223 Remington is the parent case for the .300 BLK, although J.D Jones commercialized this Wildcat cartridge from the 5.56x45mm NATO round, which eventually became the SAAMI (Sporting Arms and Ammunition Manufacturers’ Institute) standard when submitted by AAC (Advanced Armament Corporation) and Remington. Contrary to popular belief, you cannot make a reliable and consistent shooting .300 BLK from a .223 Remington. This has only to do with the base diameter and rim thickness. This does affect pressures and velocity, and although minor, fundamentally alters the cartridge enough to justify calling a .223 cartridge turned to 7.62x35mm a Wildcat as opposed a 5.56x45mm NATO cartridge turned to .300 BLK.

The .300 BLK in my opinion is a great in between cartridge that is best for those who want something that excels at nearly everything you can throw at it, but flawless at nothing. Jack-of-all-Trades Master-of-None may be a better way to explain it. Leaving scientific data out for the sake of brevity, let’s analyze some of the things we know it can do. This cartridge has more energy than either the 5.56×45 NATO or the 7.62x39mm Soviet cartridges at both the muzzle and 500 meters. While it does have more bullet drop than either at 500 meters, it was specifically designed for shorter ranges (460 point target max). The Blackout has many of the same features as most AR-15s making it practical to own multiple AR (or uppers) in .300 BLK and .233/5.56 NATO. Since the base cartridge is the same, both use the same magazine, a big win for shooters, LEO, and Military. 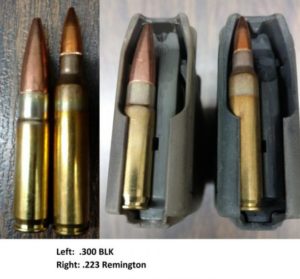 For reloaders the .300 BLK is a dream, you get .308 projectiles in the grain you like (110 or so for supersonic and up to 220 for subsonic) and load into a 5.56 NATO cartridge. This will take some time, as you have to cut and then resize the brass before it will take the .308 projectile. Aside from the labor, you get a lot of different ways to load it. For a longer barrel (16”) you can load rifle powder such as Varget behind a 125 gr Sierra Gameking projectile and have a great .300 BLK that’s flat shooting and hard hitting. You can also use a pistol powder, my favorite being Titegroup, behind a heavy or light projectile being pushed through a 9” barrel and have a great SBR or pistol AR.