The Black Rifle, AR-15, M-16, Armalite Rifle Model 15, AR-10, etc. Most folks understand that this firearm is the most basic in American security and have stated things such as “If you own an AK you must be a Commie”, or “If you don’t own an AR you’re a liberal, idiot, or both”. Both are equally inflammatory statements that have zero bearing on the actual rifle itself, nor should it. I illustrate that point to highlight how people have become fanatically defendant to the rifle, and it’s many variants. The Allure of the Black Rifle is a living, breathing, essential part of the firearm community. I’ve heard some controversy from the anti-gun crowd regarding my use of the term “essential”. While I’ve always started out enjoying the conversation (those that began civil anyways) I cannot say that I agree with the anti-gun crowd, and their argument that a gun cannot ever be essential. To understand the allure of the American Rifle, one must understand why it is essential, why it has become a symbol of freedom, and why it has such a loyal following to many Americans, as well as others throughout the world.

The beginning of the rifle starts back in the 1950’s and was designed by Eugene Stoner. Many believe that he created the AR-15 as a direct and polar opposite to the AK-47, that is untrue. Many also believe that it is an inferior firearm in terms of durability in sharp contrast to the aforementioned AK. If you look at this with the narrow scope of durability, then you may be correct. But that leads me to my next point, which is how versatile the AR platform is as it comes in more varieties than one could imagine. I was on Impactguns.com the other day and noticed that the “AR” section on their homepage (already a good indicator of its popularity, as it’s the only style of firearm that has a dedicated section to it) has 19, yes, I wrote nineteen calibers. They have everything from 12 gauge to 30-06. While this isn’t the end-all be-all of online firearm distributors, this goes to show how many varieties one couldfind in less than a minute, at least 19.

The AR platform when compared to the AK has so many different aspects to it. First and foremost, the original M-16 that was so popular during the Vietnam War is vastly different from the many different M4/AR-15 rifles available today. The M-16 is a gas-operated, rotating bolt, air-cooled and magazine-fed, shoulder fired weapon. The barrel chrome-lined, 20”, and capable of sustaining automatic and burst fire. Obviously, most civilians have never been able to hold a fully automatic rifle, let alone fire or own one. To name a few, one can look at the variations in these rifles such as chrome-lined, Melonite, or Stainless Steel barrels, bull or fluted barrels, direct impingement, long-stroke piston, or short-stroke piston operations, fixed and fully adjustable stocks used in precision rifles, different calibers, and the list goes on. So to compare or contrast the AR platform to the AK platform is a very unfair comparison. But this unfair comparison adds to the Black Rifle Allure if you ask me.

The Allure as I’ve referenced in this article can be directly linked to the AR platforms ability to accommodate nearly any accessory one can think of.

However, some people take it a bit too far! When contrasted to the AK-47, one immediately can see the difference in modularity that the AR platform allows for. This is not to say that some AK rifles are not capable of accessorizing, but it is worth saying that the AK
rifles are not as popular among Americans. I personally own multiple rifles in the AR and AK platform. While each has their pros and cons, I am much more likely to pull out my AR than my AK when heading to the range. This is simply because I enjoy my AR platform rifles more so than my AK rifles. I am only one person though. 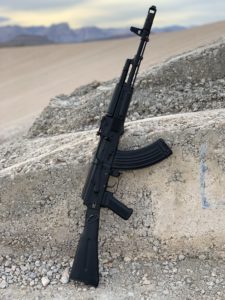 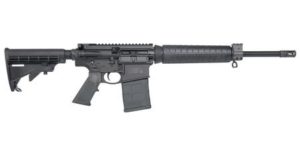 I took a brief look at the type of people that use these rifles most, our Armed Forces, to determine what type of people they are in terms of customization. I myself being a combat veteran, know firsthand that the standard issue M4 rifles only go so far. Most of our forces have Trijicon ACOG scopes, EOTech, Elcan, a PEQ-15, M320 Grenade Launcher, vertical foregrip, upgraded buttstock, Docter sights, Leupold MK IV Scopes, etc. Then you have the additional items that folks buy on their own, such as buttstock mag pouches, single or dual point slings, Magpul or Lancer Tactical Magazines, and many more. This is just one area that we customize our rifles, in a combat zone. Now let’s take our Soldiers, Marines, Airmen, and Sailors and consider that most of them are men in the age group of 18-25. A decent amount of them are single, and have either trucks, Jeeps, or sports cars in addition to a slew of firearms stored in their on-post housing or the arms room for the barracks dwellers. I know from personal experience that these guys in a garrison environment are out and about on the weekends in the mountains around JBLM, WA (Joint Base Lewis-McChord), Land Between the Lakes, the Alaska Wilderness, swamps of Louisiana, or theplains of Kansas mudding, shooting, and generally having a great time. The one thing these guys all have in common? They all have modified trucks, Jeeps, sports cars, and firearms. They congregate with friends, family, and the locals take notice of what they have. Trust me, 0600 on a Monday morning try driving around any Army base and all you see is lifted trucks and Jeeps, heavily modified muscle cars, and the occasional Prius that some guy’s wife is driving her husband to work in because he may still be drunk from the night before.

Back to the firearms, my point to it all is that our Armed Forces are modifying their deployment weapons for various reasons. They bring this mentality back home to their friends and families, usually owning at least one AR style rifle. Most people can spot a service member from 11 miles away, and see this at the range, the mountains or wilderness, driving insanely fast for no reason on Rogers Lane just outside of Ft. Sill, etc., and this lends to people noticing that everything most our Armed Forces have are modified, especially their AR-15s. It doesn’t take a genius to notice that a lot of people respect our troops and the decisions they make regarding firearms, since a decent amount of them have seen combat in multiple countries. This fact is a good reason why people start watching and learning from our service members and trying to buy the same firearms, taking notice of the tactics and equipment used, and daydream about them being a Soldier or Marine and holding a real M-16A4 or M4A1, with a fully automatic selector switch.

The people I am referencing are civilians, and most have never and will never get to hold the automatic rifle. They see through their eyes an American hero, who has a deep knowledge and understanding of how that specific rifle works. It all adds
to the allure as they know they’ll never understand what that service member has been through, and they must have been effective at their job overseas being as they’ve returned from a combat zone. The civilian gun communities begun developing their own modifications for these firearms, and it further adds to the allure, along with the fact that its American made, for the American Soldier, by the American working man or women. In today’s day and age, this is a rare commodity that is very sought after by the people of this country. This has also been going on for the better part of half a century now, and has added to the legend and allure.

The author currently lives with his wife and two children in Dayton, NV. As a combat Veteran of the United States Army, Justin Daniel was medically separated for shoulder issues developed during service, and seeks to live out a peaceful yet productive life as a civilian once again. Expect to see more in “The Black Rifle” series of articles. If you have anything to contribute to series, please don’t hesitate to send it on over, as you will be credited for your contribution.